In 2019 the Galo da Madrugada will be honoring all the women who, with their strength, have helped the association from its emergence, its growth, until arriving at the present greatness. Joining the Frevo and the Women, came the theme: FREVO MULHER, which coincides with the name of one of the Frevos most played in the Pernambuco Carnival. This song, FREVO MUHER, is written by Zé Ramalho and was recorded initially by the singer Amelinha.
The song “Frevo Mulher” becomes the strong point to honor the claw, the plural beauty and the trajectory of women’s conquest in the opening procession of the 42nd carnival parade of Galo da Madrugada, which invades the streets of downtown Recife -PE on March 2, 2019. 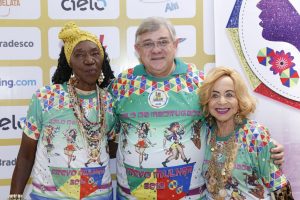 With the signing of the set designer Ary Nóbrega, the allegorical floats of the association, six in all, will present elements that illustrate the strength of women in various fields of action. This year, the allegories still have a novelty: each car will take a stand with you. In total, five women were invited to give faces to the honorees: Amelinha (singer and songwriter), Fabiana Karla (actress), Lia de Itamaracá (dancer, singer and songwriter), Yane Marques (pentathlete) and Léa Lucas ). The costumes are in charge of Carnival Francisco Câmara and Anderson Gomes.

1. Clarins and trumpets, announcing the arrival of the Galo da Madrugada;
2. Car opens wings with frevo passers and the traditional Rooster taking as inspiration the joy of Lea Lucas, one of the most iconic folions of our Carnival;
3. Allegory “Frevo Mulher”, which carries the theme of Carnival 2019 and all the references of the song of Zé Ramalho, inspired by the singer and composer Amelinha, with icons such as the lady of the palace and the Woman of the Day;
4. Allegory “Pernambucana de Raza”, illustrating the history of claw and resistance of Yane Marques and bringing reference of the runners of Ancient Greece;
5. Allegory “Ciranda de Lia”, narrating the story of Lia de Itamaracá with elements such as rafts, coconut trees and the traditional ciranda;
6. Allegory “Oh, Beautiful”, closing the parade with the inspiration in the songs “Oh, Bela”, of Capiba, referring to the irreverence of Fabiana Karla.

Hymn of the Galo